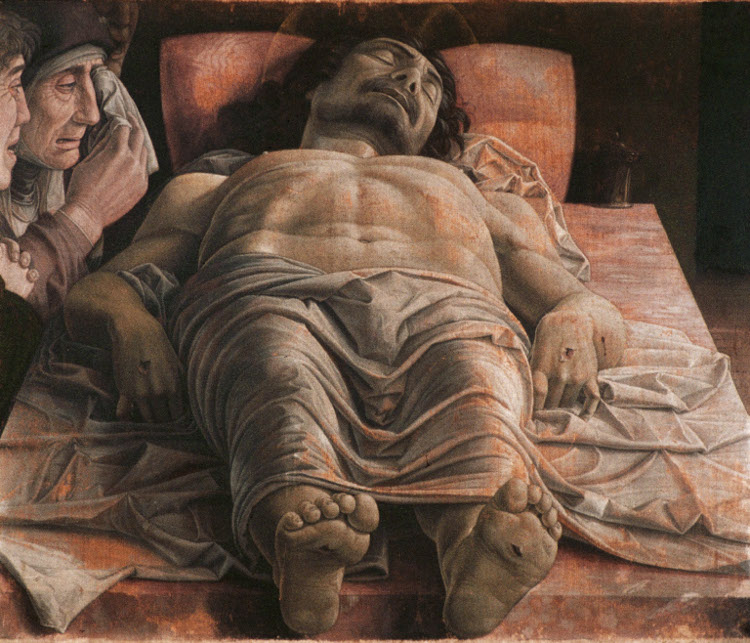 Why Mantegna's Christ is now dead

If you travel to Milano you’ll of course want to see the amazing Duomo. Its gothic spikes are unforgettable. Possibly you’ll step in the Pinacoteca di Brera to admire the great collection of European, and especially Italian, classical painting. Indeed there are several masterpieces.

The one I want to take you to is easy to find (we often tend to get lost in those big museums). At the moment it’s located behind Bellini’s Pieta. So first, take the opportunity to stop there. The more you’ll look at it, the deeper you’ll feel the tenderness it embodies. Hence the way the hand of the right figure (St John) touches the Christ’s tummy. Note how Mary places her cheek against his—her eyes penetrating him with love. If Jesus is already dead or not doesn’t matter: what’s clear is that he’s relieved. A relief from the suffering, of course, but more profoundly the beatitude he expresses occurs because time, now, has abandoned him. He’s not trapped anymore in the prison of “a lifetime.” Relieved. (A bit like—to give some kind of an idea—the ephemeral moment just after you had an orgasm)

Another artist painted that in an even more extreme way in his Pieta, and that’s Antonello Da Messina. But that’s for another trip.

Let’s come back to where I wanted to take you. So step aside from the Bellini and move forward. You are about to set your eyes on the most famous painting of all here: Mantegna’s Lamentation over the dead Christ.
What do you see? The room is dark, large and empty. It seems you have entered a temple, but without candles. In this darkness your attention is straight away caught by the illuminated rectangle. You can see and guess it’s the masterpiece you are expecting. Still, the unreal atmosphere makes you kind of doubt. A few steps more and you are facing it—well not quite, as it has been hung at a kid’s level. But nevertheless, now you can see it in detail and it’s indeed the original canvas painted in the 1480’s.
What made it hard to distinguish it as an object (paintings as magical as they can be, still always remain objects) is the fact that it’s hanging behind the surface of the wall. A rectangle of the same size (81 x 68 cm) has been carved out of the dark wall raised there specially for the Master’s work. It’s a kind of gigantic frame.

So now, keep calm, and start looking at what’s painted. You see the lying corpse with its feet coming towards you. On the left you notice the profiles of three heads witnessing the terrible scene. Their expressions are full of the pain of those living a tragedy. Detach from them and let your eyes drift back to the Christ. Although you are also witnessing the same event as the three you just left, your feeling is totally different.

In the way Mantegna painted it, you are looking over the lying body. The point of view he chose pretends you are standing and looking down on it, as if the marble table it was laid on was slightly lower than your ankles. This, of course, emphasizes the strange perspective in which he depicted the dead man.

I say strange because many things are contradictory here. I won’t give you a list of all the elements that follow or deny the perspective of this image, as you know already that this has been much discussed and is one of the main reasons of its success and fame. Indeed, its uniqueness partly comes from the endless tension between what merges towards the background, following the perspective, and what resists that movement. My point is slightly aside.

Let me tell you. But first, don’t you feel uncomfortable? Not only are you looking down on this scene, but also, as the canvas has been hung at the height of a living-room chimney fire, you are looking down at the painting itself. Please feel free to get on your knees and face it at a normal height (if you sit on the ground you’re a bit too low).

Now, forgetting the wounded hands and feet and the story we know about that subject, does this man looks like he’s dead? Are you sure he’s not sleeping? Like me you may feel he’s somewhere in-between. Not dead but not alive—in that sense similar to Bellini’s Christ which we looked at previously (Bellini was the brother of Mantegna’s wife). But here, what maintains him in that “in-between”? All the horizontality of his body pleads he’ll never stand up again. Yet. Yet in the way Mantegna painted it, with the white sheet covering his sex and legs, the dynamic is completely vertical. If the head appears so big in relation to normal perspective, it’s because it’s simply still above the feet! Hence the folds of the tissue, they are not lying but attracted by gravity. So you see, this is my point: Mantegna’s Dead Christ is not lying, he’s rising!

You may rightly say I exaggerate. But look at it longer. Is it more like a landscape, heading towards the horizon, or like a column in a temple?

Like several other masterpieces, Mantegna’s painting confronts us with an endless paradox. But obviously, this didn’t strike those who had the idea of hanging it in the stupid way it is now. Maybe because they didn’t look at it enough. Surely because they wanted to add to the work. A kind of pedagogic helper: “Mantegna for Dummies”. Or is it they forgot that, like the painter and the Christ, we too have feet and legs to stand on, eyes that can travel, and a mind capable of imagining. Don’t you think? 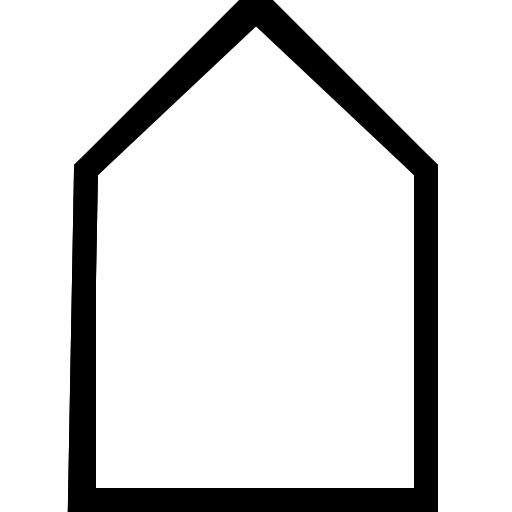 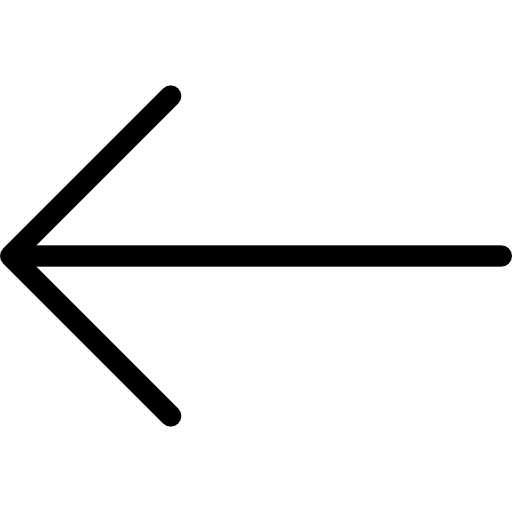